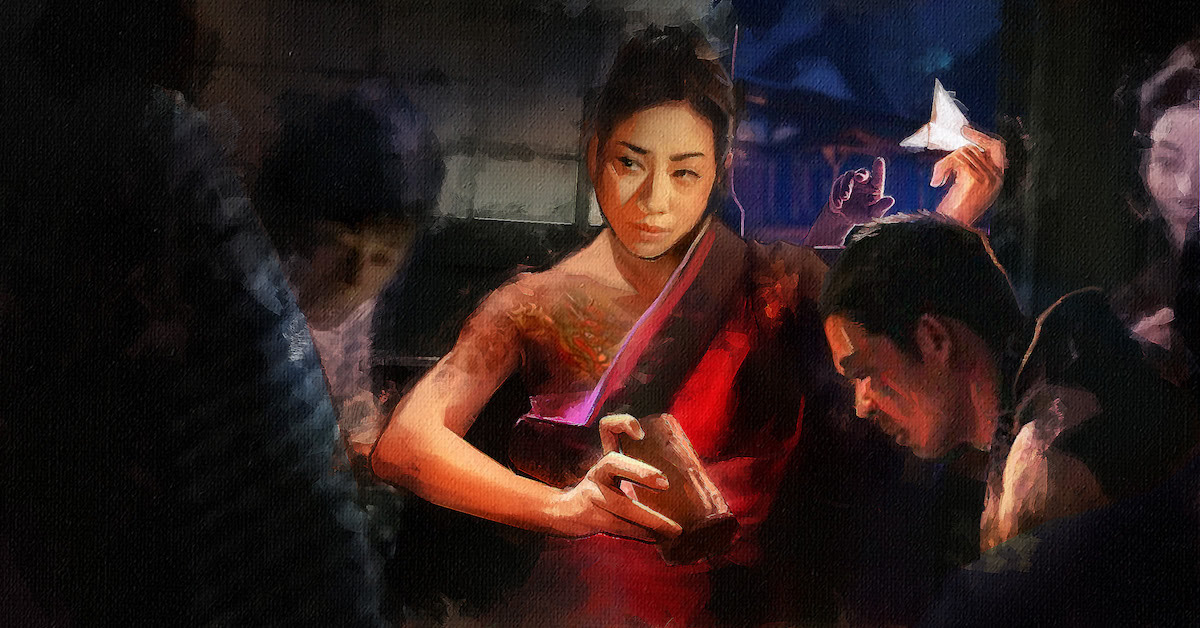 We’re pretty close (about one hour or two!) to the set’s release, so here’s our final preview of cards. We did get another two write ups by two of our play testers, so read on to see what they have in store for you.

Here we are, Scorpions and non-Scorpions, with my shiny, amazing, favourite card.
Darn, look at that ART. It’s so good I’m speaking with the artist to have a bigger version so I could hang it in my dining room!

With a not too exciting stat-line (1 cost 1/1/1) but an effect that buffs all shinobi including herself (so beside turns without favour she’s a  2/1/1 or 1/2/2).
Now a quick list of shinobis that work particularly well with her, in my opinion:
Bayushi’s Saboteurs, Shosuro Takao, Yogo Tadashi, Nightshade Infiltrator, Shadow Stalker, Shosuro Sadako, Shosuro Botanist and Silent Enforcer.

During playtesting, I tried her in a dishonour deck with a small number of shinobi (only 2x nightshade and 3x Sadako) or a bigger number of shinobi, including all the cards I just mentioned, and it turns out she is and always has been very strong. Consider the following three things:

In my opinion, the card fixes in part the problems regarding stats in more aggro-oriented decks, she’s very versatile, and costs only 1.

I tried her also due to her synergy with Fawning Diplomat and Shadow Step, allowing her to give you the buff you need earlier and claiming the favour yourself. In my opinion, she basically calls for two copies of diplomat if you plan to slam 3x of her, which I’ll do. Last but not least, she also has a synergy with Soshi Mika, that basically turns her into a living Kuni Laboratory.

Sake House Informant will replace Sake House Confidant. She was not played because she was simply too bad.

I Will Draw YOUR Cards! – AzgalorIsMyDad

Card draw has always been difficult for Unicorn. Spyglass was banned early and it took all the way until the last of the clan packs to get Spoils of War. Then Khanbulak Benefactor came along in the Temptations Cycle. She single-handedly expanded play styles and allowed cards that were previously out of the question in a competitive setting to be reconsidered. Unfortunately, it’s not difficult to save characters in pretty much any clan that tries these days, so her continual dire effect simply proved too warping for the game.

Sand Road Merchant helps fill the role of drawing cards, but she does it with Unicorn’s unorthodox flavor. Unicorn’s merchants love to interact with opponents – previously using their fate and provinces. Now they can use their cards as well! Trading on the Sand Road, which came out in the Unicorn clan pack, has always been a meme, but still a good representation of this same sub-theme.

Now, Sand Road Merchant drawing opponent’s cards is not nearly as reliable as drawing your own cards, but it does have some advantages. Firstly: Disruption. Each card you draw is permanently removed from your opponent’s deck. You potentially have access to deny crucial lynchpin cards as well as the small knowledge of the placement of the card you didn’t choose. Secondly: Unpredictability. Being able to supplement your gameplay with your opponent’s cards adds an extra element of surprise. You may be content to deny a Way of the Crab you can never play or you may draw a Ceaseless Duty to help swing the game in your favor. You may have to choose between two Ways of the Lion or you may steal that Fan of Command. You never know what can happen.

The biggest downside of this fun card is that the cards she “procures” are temporary. They’re only accessible for as long as she is alive. The cards do not go into your hand, like other card draw abilities. So Unicorn players must weigh the potential power of the card vs the ease of play. Yes, taking an AFWTD might be great for next round, but my Merchant is fateless and leaving play this round, so I’ll take this Tessen instead.

I’m excited to further expand Unicorn’s courtier card pool to help support new decks and powerful cards like For Shame while maintaining Unicorn’s ability to stoke that feeling of uncertainty in my opponent – whether that’s through movement, potential bursts of characters, or now, previously unconsidered card combinations.