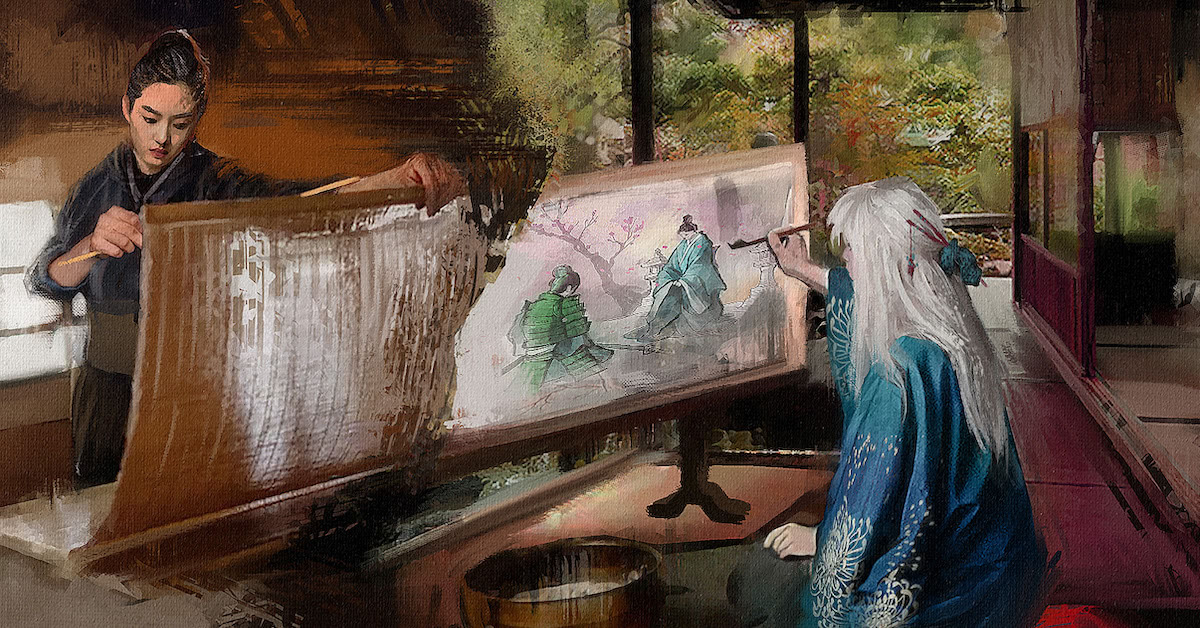 Welcome back to another preview of three new cards of Restoration of Balance. This time, we asked some of our play testers to write the explanation for the new cards, from their point of view. Let’s go!

Recursion, especially 0-fate recursion, can lead to repetitive games, and often makes efforts at counterplay fruitless and frustrating. Additionally, Emerald Legacy is trying to move away from 0 cost attachments that add 2 or more skill.

Another request we’ve seen from Phoenix players is to stop printing cards that lock the clan into needing a ton of shugenjas. We designed this version to still help spell-heavy decks, but to not require shugenja to function. The addition of being able to grab Kihō and the reward for playing it on a Scholar will, we hope, open up deck-building options. Finally, the archivist is a Follower, which may create an interesting value in Phoenix splashing Lion or vice versa.

The Wealth of the Crane was a big economy card for Crane. Not only did it draw 4 dynasty cards, it allowed you to generate large amounts of value by finding economy holdings that would remain in play forever.

With the ban of Wealth, we noticed that Crane lacked strong, reliable economy cards. At first, we experimented with removing the ability for Wealth to pull holdings, but found that it was too similar to The Western Wind. Rather than duplicating an existing card that can already be very strong, we decided to go in another direction.

The new direction we decided to go in was for a design that generates economy via the conflict deck rather than the dynasty deck. 1F events are often overshadowed by 0F events. The effects, while interesting, do not justify the cost increase from free to not free. The events themselves are also often situational, so even when you save fate for them you might not be the right situation to play them. This adds up to making event based decks worse than attachment based decks. Crane Industry is designed to help push event-based decks to be able to do powerful things.

In the past, Crane has been able to create fun and interesting decks built around the discount on Kakita Yoshi. Those decks have never been competitive, as they have suffered by relying entirely on a single expensive dynasty character. Additionally, Kakita Yoshi will be rotating out, so we felt like a more reliable version of Yoshi’s effect would help rejuvinate those decks and allow them to competitive in the meta.

We are hoping that this version of Crane Industry is capable of creating a new type of meta Crane deck that focuses on stringing together combinations of 1F events into flashy, powerful effects. A deck built like this would be a departure from the standard midrange dueling tower builds that Crane is currently shoehorned into running.

A very powerful tool that was released for Unicorn in the premium box, Under Fu Leng’s Shadow, Daikyu has received an overhaul to bring in line with other attachments. Let us take a gander at the new, shiny Naginata.

Naginata is a 1 cost restricted weapon with a new stat line of 1 military and 0 political power. We can see here that the attachment has had the floor of the attachment raised a bit by gaining 1 static military strength. The card also keeps “gain military strength while 1st player” but that has been reduced to 1, lending support for Unicorn’s theme of wanting to be 1st player alive. The biggest change to the card comes from the Conflict Reaction. Gone are the days of being able to bow someone on conflict declaration and being able to secure most, if not all, conflicts. The card now operates off movement and Unicorn controlling the battle through movement. In exchange for losing out on a bow from conflict declaration, Naginata can bow a character with lower military strength after you send a character home. This is a definite upside to send something home alongside the ability to bow something with a move in. Sometimes you can’t gain enough military strength to bow a honored, towered up Matsu Tsuko, or some high glory Shugenja of the Phoenix clan that have been honored. This is where the send home on the ability can come in use. Unicorn has a few send homes in Way of the Open Hand, Bonds of Blood, and Challenge on the Field. It is the perfect way to deal with big towered characters and get a bow on the next largest character in the conflict. You can even combo it with the few harpoons Unicorn has in Honest Challenger, Moto Ariq, and Maelstrom to possibly set up a kill with Fallen in Battle.

Going forward into this brave new meta, Naginata will be a flexible tool in the Unicorn arsenal. It will give Unicorn Swarm decks that look to take advantage of Strength in Numbers and Bonds of Blood a way to deal with pesky tower characters and continuing to force your opponent to over defend by threat of a send home and bows.

And that’s it for this week! What do you think of the new cards? Do you like the explanations written by the play testers? Let us know in the comments or on discord!