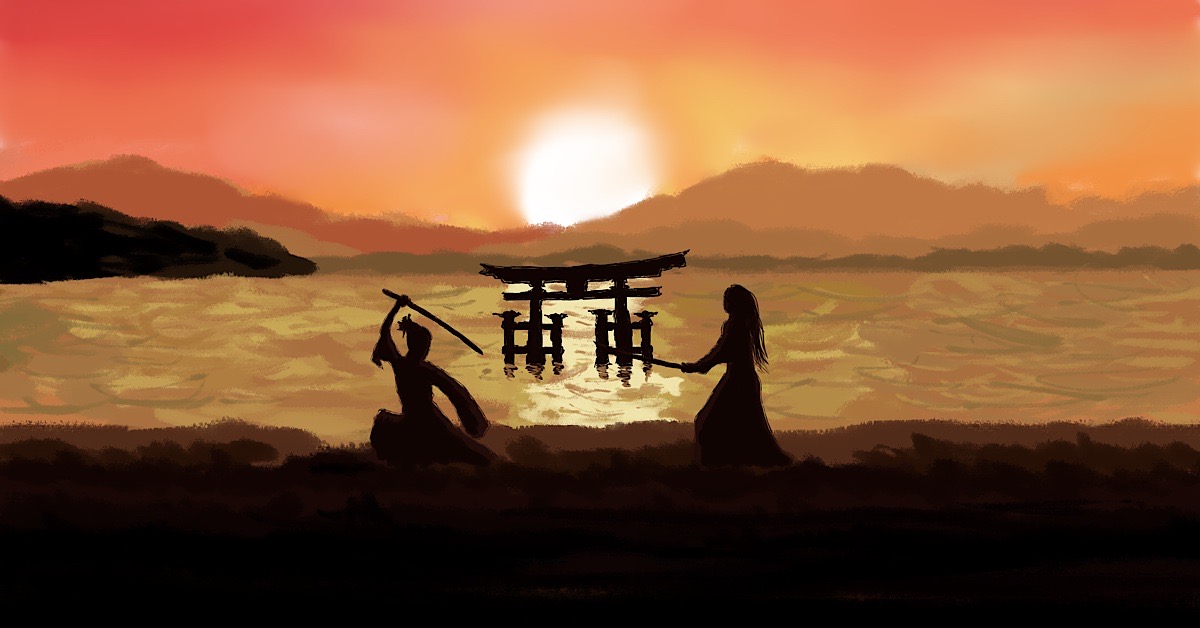 Another Wednesday, another Preview of our upcoming set Restoration of Balance. As we’ve shown you one card yesterday already, we will today look at two new cards, including a detailed description from a guest and from one of our play testers.

The card seems like it is meant to work with Shiro Kitsuki, and more specifically, with the ‘on-hand-reveal’ effects that dragon have with:

Let’s take a look at the card’s fundamentals, how it might fit into a deck with the above cards (as I see it), and then why it might be interesting outside of dragon.

The card’s stats are very vanilla. 2/2/1 is probably the baseline stats for a 2-cost character, though the courtier trait is quite relevant. Another neutral courtier with the same stat-line is Seppun Truthseeker, though its effect makes it more interesting in Backhanded Compliment or honor ? decks. Dragonfly Mediator will probably be able to slotted into decks which might have been concerned about letting both players draw. Don’t get me wrong though; any clan with courtiers worth their salt will probably not be playing this card.

The action ability is nice in that it can be triggered whenever, which is fairly rare for abilities that can reliably and repeatedly reveal the opponent’s hand. However, for anyone planning on using it multiple times, I have some bad news – your opponent is likely to show you their worst cards, and then to show them to you repeatedly, if able. The fact that it reveals three cards of your opponent’s choice also means that the information gained will probably only be useful when your opponent’s hand is around 5 cards or less, which is also where cards like Honest Assessment and Kitsuki Chiari shine.

Shrewd Investigator may not be a card on most people’s radar, but it’s proven its worth to me in this style of Shiro Kitsuki deck. At 1 cost, with the courtier trait, and 2 glory, it can fill a few different niches for very little investment, and will occasionally be the sole reason why you can trigger the abilities of your Keen Warriors and Discerning Yorikis. So how does the Dragonfly Mediator compare? At 2 cost, they must compete with Kitsuki Chiari, Keen Warrior, and Discerning Yoriki, without even mentioning the cards that she doesn’t necessarily combo with. On the plus side though, this card actually has military skill, a major shortcoming of the Shiro Kitsuki deck in my experience. On top of that, the effect is always up, and will always yield 3 cards of information, even outside of conflict, something which cannot be said for the Shrewd Investigator.

One thing that must be said for such a deck is that it really would want another effect to trigger off of the opponent’s hand being revealed, and ideally, not in the 2-cost slot. That being said, I’m not aware of other unpreviewed cards so it’s not impossible such a card exists. As it stands, I’m likely to try Dragonfly Mediator out in 1-2 exemplars and will adjust from there. It may make silly plays like 3 fate Keen Warriors worth going for more often, and courtiers are quite important to the deck.

Outside of dragon, this card may be an interesting body worth considering to up the courtier count in certain off-meta Crab, Unicorn, Dragon, and Lion decks, with the information ability acting as a sort of ‘bonus’. It may be interesting in any deck looking to splash Honest Assessment as well, though I’m not sure I’d go all in on that ( more of a 1-2x to help sniping for cards from time to time).

A big hole in the Crane toolbox is an answer to bow heavy decks. Crane relies on their expensive characters to threaten conquest, but lack an efficient and unconditional way to ready these big characters after getting hit by one of the many bows present in the current meta. As a result, we have decided to reimagine Kakita’s Final Stance from a conditional ready to an unconditional bow protection card. Dragon Duelist decks often run into similar problems, and so rather than printing the card without influence, we decided to trait lock it so that Dragon players can use it in their duelist decks as well.

Comparisons can be easily made to both Fan of Command and (the banned) Way of the Warrior, but Kakita’s First Kata presents one very important restriction that these two do not have: it cannot be used to ready someone who was not already ready at the start of the conflict. You cannot use Kakita’s First Kata to create new conflicts, and you cannot use it with movement to allow your character to contribute skill to an extra conflict after bowing. Kaktia’s First Kata allows you to present your character as a strong threat that demands an answer and ensures that it will be able to participate in the resolution of the conflict. We’re hoping that introducing this card forces Crane opponents to find ways to deal with Crane characters aside from bowing them, similar to how they would need to find alternatives to bows to deal with a midrange character from a faction such as Lion.